Even though it is sooooo HOT right now, summer is officially over. Let's just review some of the goals...

1. Blog every week. I did manage to blog 7 times, though only two and a half were truly on task about knitting.

2. Finished knitting included a hat and a scarf. Progress was made on the shrug, though there is still some left to go. Many projects left in the queue...

3. Viola d'amore goals were met! I finished learning and performing 4 pieces for the Congress in Evanston, IL, in June! And I have begun work on additional pieces and am experimenting with A=415 tuning.

A sink full of plums: 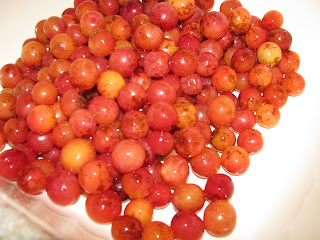 4. The vegetable garden was a complete failure. A handful of tomatoes and three tiny peppers from over a dozen tomato plants and 5 pepper plants was pretty anti-climatic. I did notice that there are a few watermelons still trying to make it. They are the size of tennis balls right now! However, several flower areas did well and looked great. Finding fruit trees on the property just as fruit was ripening was fun as well. I did not get to can as much as I would have liked, but it is comforting to know that we have some established trees ready for next year. 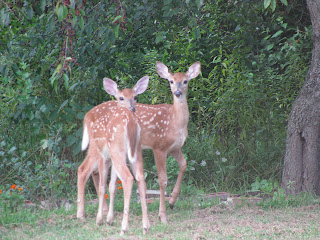 5. Bike-riding was also a disappointment. After just two rides, my right knee no longer wanted to cooperate. I rested it and had a successful 10-mile ride a few weeks ago. Taking it easy is the key here!

Of course additional items such as alpaca fever and the start of school in early August put a partial stop to some of the activity. In all, it was a lovely summer and I have no regrets about slacking too much. And the good news is that with Autumn here, we will presumably get cooler temperatures soon which will inspire the KNITTING! Bring on the wooly yarn!