Last weekend was not only filled with family, but I also received some unexpected fiber-related treats.

These hand cards belonged to the great great great grandmother of my step father-in-law. His mother wanted the cards to go to a home in which they would be appreciated, which they certainly will be here! The woman who originally owned the cards is Cynthia Catlin Miller and she lived from 1813-1883 in Warren County, PA. She was an abolitionist who established the Female Assisting Society and the Ladies Fugitive Aid Society in Sugar Grove, PA. Her son Franklin Richard Miller founded the Miller Foundation Tree farm, the first tree farm in Pennsylvania. 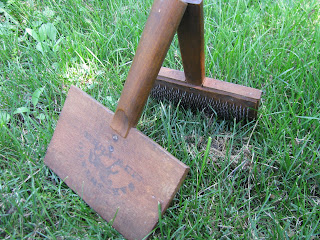 The cards have "Sargent & Co, New York" printed on them with a galloping horse in the middle. It is unclear which era of the Sargent Company produced these cards. One article reads that J. B. Sargent's father's company made wool cards for the mills in the New England area. When J. B. Sargent took over around the 1860's, it sounds like the company he headed made more hardware and locksmith items. At any rate, the cards can be solidly attributed to the early to mid 1800's. 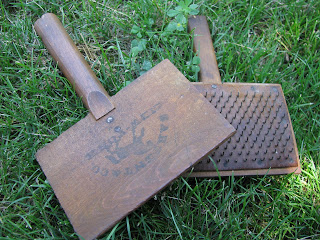 While the cards are in excellent shape still, I will DEFINITELY NOT be using them for carding fiber. The leather holding the metal teeth is in good condition, but the teeth are just a little rusty. They will serve as a nice decoration in my study!

A friend of my mother's friend is a very active spinner in Maryland. She must have run out of space to store all of her yarn goods, and so she is passing some of them along to me. I am very grateful, as I was about to order another batch of Jared Flood's lovely American-made SHELTER yarn for a hat and scarf project. I am sure, however, that he would approve of me using handspun, American made yarn for his Fortnight hat and Wayfarer scarf patterns in place of the SHELTER yarn. 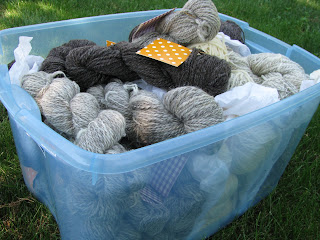 She prepared some of the yarn for sale at the Maryland Wool Show in 1990. The little tag on the gray yarn states that it comes from a Copworth Gray sheep named Norman. The brown skeins come from a Romney Brown sheep named Helga. It's fun to have a "personal connection" to the yarn one is working with. 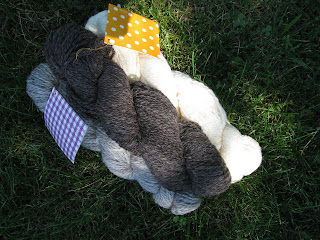 So now, if you will excuse me, I think I will cast on a project!
Posted by Elisabeth at 4:32 PM