The first official animal at Shady Grove Alpacas, our sweet Great Pyrenees Tenny, succumbed to bone cancer last Wednesday. She loved to snuggle our legs and get all the petting whenever we came to the barn. A visitor meant that it was THE. BEST. DAY. EVER! A gentle giant, she slept most of the day (unless there were gunshots) and barked all night. This first picture took me 15-20 minutes to capture since she was desperate for petting, in spite of getting an above average number of cuddles already. I consider it her version of side-eye! 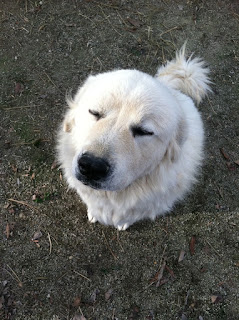 Every winter she would grow a thick coat and suddenly look extremely shaggy on a snowy day. She had an extreme aversion to entering buildings of any kind, with the exception of the barn. There were two instances where the temperature dipped so low that we were genuinely concerned and took her inside. She was uneasy throughout, and immediately lay down on a pile of snow for a nap upon her return outside! On one special day every summer, her thick winter undercoat would suddenly loosen and come off in huge tufts. While it was easier to remove at that point, it still took days, even weeks, to get all of that fluff off of her. 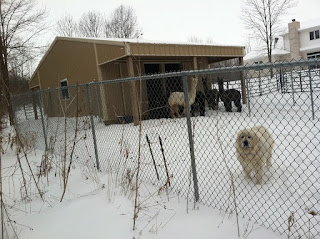 She loved going for walks. The breed standard for a Great Pyrenees dog is extreme independence, so walks were often an adventure in leash pulling. You had to anticipate what she would be interested in. She loved digging out of the enclosure and going on her own adventures at the creek. She would usually return completely wet and muddy and chill on the front porch, but there were several times where we were out in the neighborhood for untold amounts of time looking for her. Eventually, we had to put her on a long lead on the outside of the barn to keep her safe. 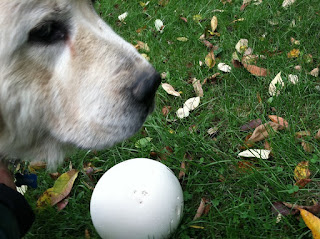 Here she is checking out an enormous puffball mushroom. Unfortunately, she didn't let me know that they are highly edible and tasty. 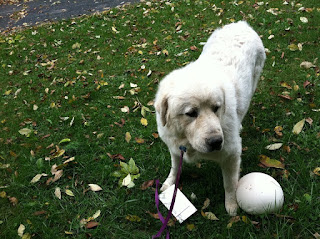 Alas, the season of having a dog may be permanently over for us. It was a really fun time, but if we can get a Suri guard llama or two, we will have more spin-able fiber and no holes to patch under a fence. We miss her bark and her sociability, and will retain great memories of her antics. 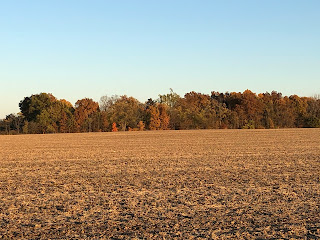 Finally, I noticed that it was finally Fall here. The trees are changing colors. With some relief I see farmers harvesting their soy and corn. I was quite surprised to see that this soy field had managed to mature. After a very rainy June, the farmer who works this field wasn't able to plant until the first week of July. I am relieved and thankful that my neighbors can still enjoy a decent harvest in spite of serious set backs this year.

Here's to being thankful, and to many good memories of a fantastic doggy season!
Posted by Elisabeth at 8:44 PM