Of all the gifts, LIFE is the greatest!

Yesterday morning, the Alpaca Farmer said that there was a lot of humming going on in the barn during feeding time. Our animals are not usually very vocal, so this was interesting news. Mid-morning I was out gardening and I decided to check on the animals. Greta was lying on her side humming a mile a minute and I thought that there is no way we were not going to see a cria today. I left for five minutes to check on something and when I returned, the nose was already poking out, followed soon by legs and then the body. I got the whole scene on the video camera on my phone. I cannot recall a time when my heart beat faster and I was more nervous. If something went wrong, it would be all on me to fix and not kill the new cria. Fortunately, the breeder told us later that the whole process was exactly "by the book."

Anyway, enough about me. Let me introduce the new little boy "Dark Star" to you. Born in the 11 o'clock hour here at Shady Grove Alpacas on September 5. 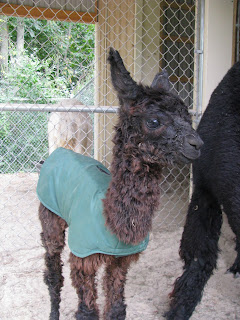 He is wearing a little coat because it is cold and windy here. Alpacas do not thermo-regulate their body temperature during the first few days of life, so the coat is critical. Since it was freezing, we had to blow him dry with a hair dryer! 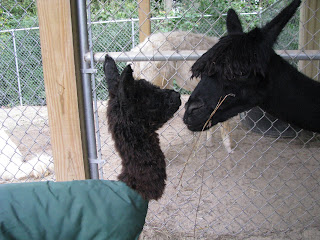 Greta is an outstanding mother. She was humming and bonding with Dark Star all day. And she was standing properly for nursing. She is very protective when we have to weigh Dark Star or bathe the umbilical cord. She has already spit off the house dog! 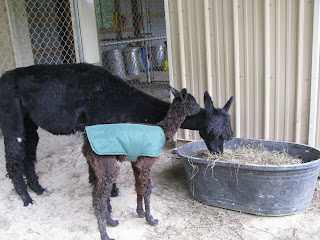 Dark Star stood up in record time, under an hour. And he was nursing within two hours. He was also already prancing around and trying to roll on the ground. The breeder said he is thriving more than the average cria! 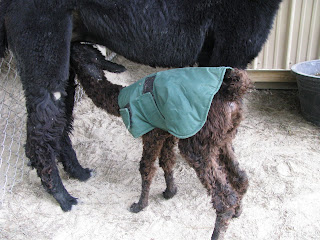 Above everything, this little guy is eye candy. How can anything in the world be so CUTE!!!! 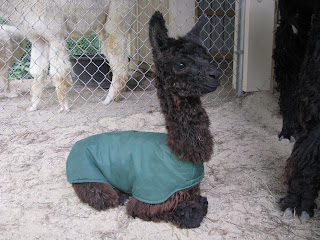