The last week has been difficult and emotionally draining. In spite of the emotional roller coaster, there have been so many moments of good fortune, serendipity, blessing, luck, answered prayers, that I thought I would share some of them here.

A few hours after I posted for last week's Yarn Along, the intended five-week-old recipient went to the hospital with a life-threatening condition. After harrowing treatments, many question marks, and continued confusion in the NICU, it looks like the little one will finally be going home on Friday. So let's look at that completed sweater. 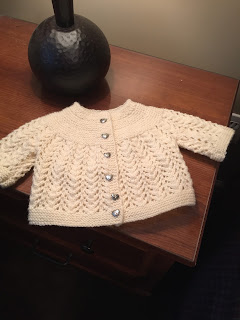 Never mind that I still can't place button holes on the button band in spite of excellent and simple instructions. I wrapped it up and The Farmer presented it to the family on Thursday afternoon. It has stayed with the patient in the NICU. There are many happy memories of Cooperstown, NY, and road tripping with two nephews knit into that sweater. Many wishes of healing and comfort to my little niece. I hope she feels the love and happiness. 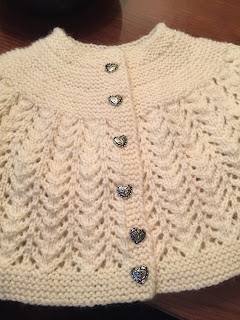 Sunday afternoon, as we were leaving my sister-in-law's house, we got a flat tire. Her neighbor, whom she had not met yet, immediately gave us some tire inflating cans. The tire inflating cans proved ineffective, but it just so happened that another neighbor's lawn care people were finishing up their work and they loaned us their jack and some other tools. Less than 90 seconds after we were finished, a tire store van cruised down the street to drop a customer off. We flagged him down and he arranged an emergency appointment for us. It took longer than we wanted to leave, but we did finally get on the road. After a dinner break, I uncharacteristically continued driving, and narrowly missed not one, but two deer standing together in the middle of the highway. There was no question that The Farmer would not have seen them coming... 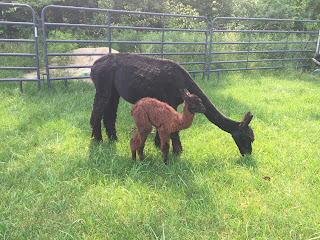 Finally, yesterday evening, we found our cria with an infected eye. We dutifully washed it out according to the instructions of my opthamologist brother. But after a picture text consult with the vet, she suggested that it was perforated and would not heal correctly, even possibly with surgery. It would cost us a lot of money or the loss of livestock. Commence painful discussion of what to do. We decided to take it to the emergency vet to have it euthanized. (Being a farmer is TOUGH business. You don't realize it until you face this situation.) A young vet tech in the back room fell in love with the cria and convinced us that she wanted the animal, would pay for the surgery, and take it home to her new farm. We were dumb founded. Really, we did not know what to do with this woman's generosity, it was so unexpected. The surgery was this morning and went really well. We are in shock and missing the little darling so much today (as is its poor mother), but what a gift for us, to know that this little life was spared. We were going to sell it in a year anyway, so the transaction was just earlier in this case. 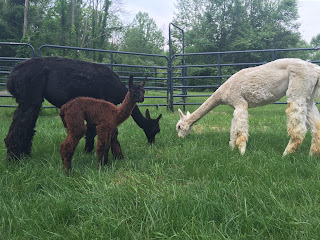 Life is to be cherished. I am taking nothing for granted for the foreseeable future.

Such a sweet story about your kria. I copied and pasted it into an email for my son, who is in vet school!

So glad the baby is doing well and will be able to enjoy the darling sweater.