This post took about a year to get from the planting stages to the product! Last summer I wanted to grow the Three Sisters which I wrote about HERE, and was especially excited about the famous Maize Morado corn from Peru. It turned out to be an extremely tall plant as well! After raccoon damage, I gleaned 1.5 pounds of dry corn kernels. 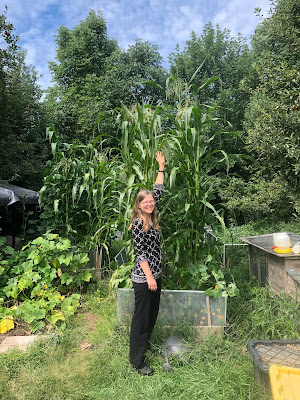 I used a compilation of several recipes, and was thankful that my mom sourced me some quinces last fall, which she cut into small pieces and froze with some sugar. I should have re-hydrated the corn, because I got almost no liquid purple juice from the first boil. Since the kernels were still intact, I decided to try a second boil, which produced more juice, but got re-absorbed somewhat during the cooling time. The flavor was less intense, so I didn't do a third boil. The kernels were still not used up, so I decided to eat them like a cooked breakfast cereal. Pretty good! Next time I make this, I will re-hydrate the dry corn and then pour off the purple juice while it is still hot. It seems like a lot of gardening and cooking for such a small reward otherwise! 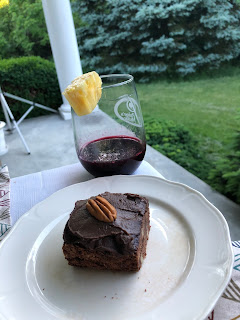 I added the lime juice and sugar before serving, and I must say that the drink was very festive! The cinnamon, allspice, and cloves really added a lot of flavors, similar to a mulled wine, but with no alcohol. I served it with my birthday cake: Chocolate Turron with chocolate fudge topping. Delicious! 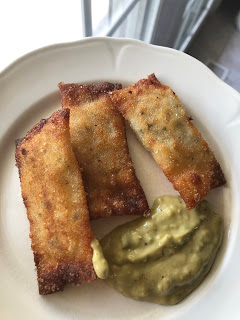 In addition to the cake and chicha morado, the birthday dinner featured an appetizer round of Tequenos with avocado cream. This delicacy is originally Venezuelan, but Peruvians are crazy about them as well. 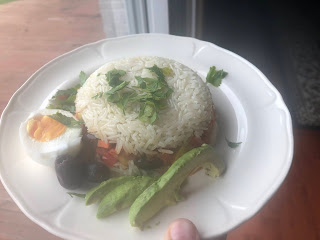 Since Peruvian cooking takes a lot of prep, I served the main course on a different day. This is Vegetarian Arroz Tapado with Peruvian rice. Now that I know how much time it all takes, I could probably serve all of these things at once. They were certainly well-received!

Posted by Elisabeth at 4:56 PM