After 13 months of growing their fiber, it was shearing day for the alpacas today. Instead of traveling to another farm like last year, a young shearing team came to us. They set up their athletic mat in the barn, strategically placing chains, ropes and pulleys around some of the posts. Then the animal's feet were secured and it was lain on its side. A classic game of "locate the head" ensues. Moonstar starts the action. 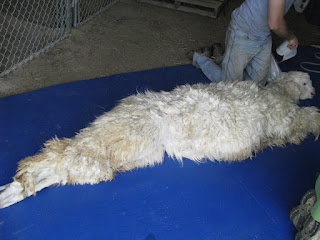 Moonstar was not a fan of the procedure. She made a high-pitched crying sound throughout. I felt terrible, but The Farmer had a grain treat waiting for her. 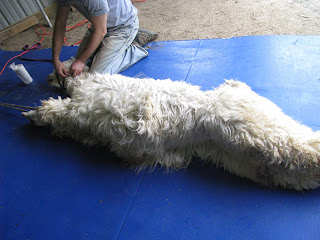 First cut into the "blanket." One reason Moonstar was not too happy: her fleece is so long and thick and a little matted. The man shearing really needed to pull the fiber apart to get started. I'm sure it felt like rough combing through tangled hair. 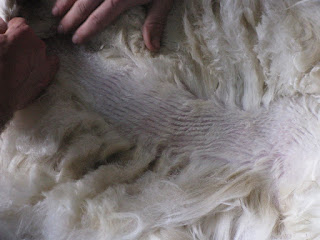 Unbelievable mass of fiber. Her total weight loss via hair cut was 7.7 pounds! 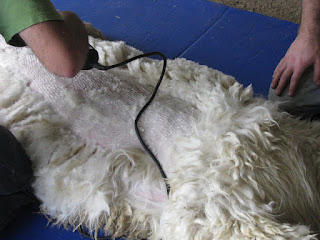 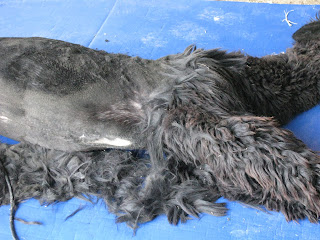 Bella cannot stop spitting so she had to have a towel on her mouth. Several men had a lot of green stuff on them... The shearing team also trims the toenails and makes sure the teeth are the correct length. Bella needed a little teeth trimming, which she took with a surprising amount of understanding. 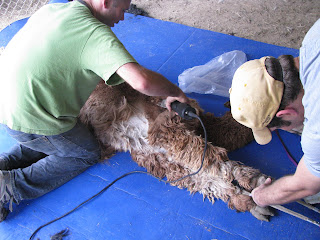 The final result: Far Side Cartoon #2 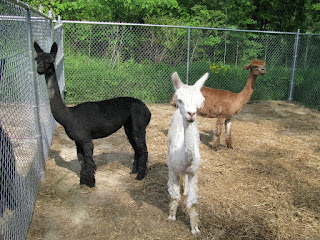 Good news about Dark Star's fleece! He has been taking dirt baths and getting a lot of straw in his fiber. It looked like it had gotten weak and broken. However, such was not the case. Everything was perfectly normal and he just needs a little hosing off and getting the hay picked out before showing. Hooray! And now, we have 18 pounds of fresh fiber to process... On top of the 12 pounds of fiber from last year. Who's coming to help??
Posted by Elisabeth at 8:46 PM