A Week of Raccoons with a Possum Chaser

On Tuesday evening of July 14, our darling chicken Athena was broken out of her coop by a band of raccoons. She had many moments of blog glory, but THIS POST was the one she was famous for. Needless to say, the marshmallows in the trap were no longer grabbing the attention of the bandits, so we switched to eggs. Eggs roll around and cannot be stolen through the bars, so we trapped a few trash pandas as a result. It resulted in some longer road trips, as raccoons need to be taken far away from home so they don't find their way home. 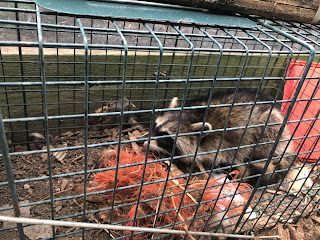 Wednesday night, we caught a little one. I took him to a lake. Hopefully he remains, ever happy to wash his food before eating. You really can't complain about a raccoon's table manners. 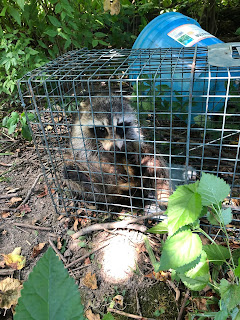 Thursday night we caught a full-sized animal. This one led to a discovery of a delightful state park I had not visited yet. I would have been happy to live in those woods! 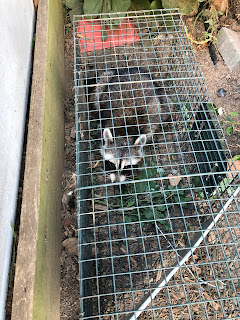 Friday night, we had another smaller, but almost full-sized version. This one got to live in a Nature Preserve, but was reluctant to leave the trap at first. Fortunately it did run after sensing freedom, but I really did not want to worry about being bitten by a rabid one... 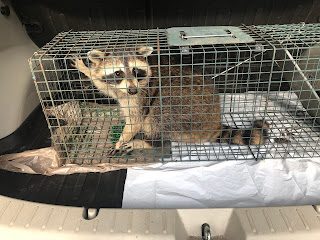 Saturday night, I hadn't set the trap until dark, which meant that I saw (a small??) one scuttling away in the beam of the flashlight. While I was gingerly placing the egg in the trap whilst swatting so many insistent mosquitoes, I heard little scratching sounds behind me near the chicken food container. I finally opened the container to have my gaze met by a set of masked eyes. I hastily shut the container, wondering what I should do next. Before deciding to hold it in the container, I looked again, and TWO small raccoons were enjoying the buffet! I loaded the top of the container with as many bricks as I could find, thinking that I would free them in the morning at the Nature Preserve. Alas, they escaped, but we did get a GIANT one instead. That one was rather hyper and off like a flash. 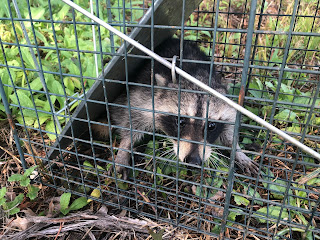 After Sunday night, there was a small one in the trap. I was driving to Ohio to see family on Monday and dropped him in a woods halfway there. As far as I think, there is at least one small raccoon still on the loose, though signs of him have disappeared. 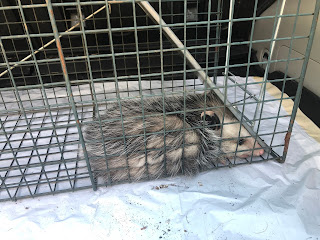 The trap was set but empty for a few days, before this opossum guy showed up on yesterday morning. It probably has a string of siblings and a mom hiding out in the woods. Apparently they like raw eggs as much as their raccoon friends. So the saga continues. I saw a set of twin fawns come out of the woods in front of the house over the weekend as well. Time to think about strategies to keep my ripening tomatoes from becoming wildlife food.

How are your garden pets, I mean, pests?! At least I don't have a ground hog!

Posted by Elisabeth at 3:16 PM